The store will not work correctly in the case when cookies are disabled.

Engine Oil 101: Where Does it Come from and How is it Made?
If all engine oils were the same, we’d probably just answer this simply: “Off the shelf at your local auto parts store.” But the process of turning crude oil into the high-performance lubricants that provide protection for your engine and the ultimate excitement for you is long and complicated. Let’s break it down and take a look at what oil actually is and how it’s made.

Where does oil come from?

In order to understand the origins of the oil that are the lifeblood of your favorite powersports engines, we need to turn back a few million pages in our history books. Although crude oil or petroleum has been called a “fossil fuel,” the story of oil is totally safe to read to your dinosaur-loving 6-year-olds. We promise! Despite what the name implies, today’s oil does not come from T-Rex or Triceratops skeletons, but rather small, dead organic matter called plankton.

Millions of years ago, the plankton living in the shallow, warm oceans around the world would gather energy from sunlight. That gathered energy would be trapped and stored in the dead plankton and sink to the ocean floor where it would mix with inorganic material deposited by rivers.

Over many millions of years, this mixture is buried deeper and deeper within the earth as layers of rock form at the surface. The deeper it goes, the warmer the temperature gets. Once the temps reach between 90-160 degrees C, the hydrogen and carbon trapped under the layers of rock begin to transform into oil – which is why we call it a hydrocarbon.

Oil is lighter than water. Once the oil is formed, it actually will begin to work its way back up to the surface through pores in the rock layers until it reaches an impermeable layer of rock trapping it below the surface. The trapped oil forms what’s known as an oil reservoir and can be drilled to obtain the crude oil.

The entire process takes an incredibly long time. Most of today’s oil that we drill from the earth began its journey between 66-252 million years ago!

How is oil made?

The “black gold” that’s pulled out of the ground isn’t always black. It can also be a variety of shades of black, brown, red, or even green depending on its chemical makeup. Regardless of color, it still has a very long way to go before it becomes the XPS oils and lubricants that protect your vehicle’s vital parts – or any other petroleum-based product.

Crude oil is transported by boat, truck, and rail to refineries where it’s broken down through a heating process into the various gasses and liquids that comprise its makeup. Sometimes this process is repeated several times in order to get the crude broken down into more usable states.

The result is a variety of liquids and gasses used to produce products like gasoline, diesel fuel, and jet fuel for transportation; tar for roads; chemicals for various cleaning products and solvents; plastics; and of course, lubricating oil that keeps our favorite powersports engines running crisp and efficiently. 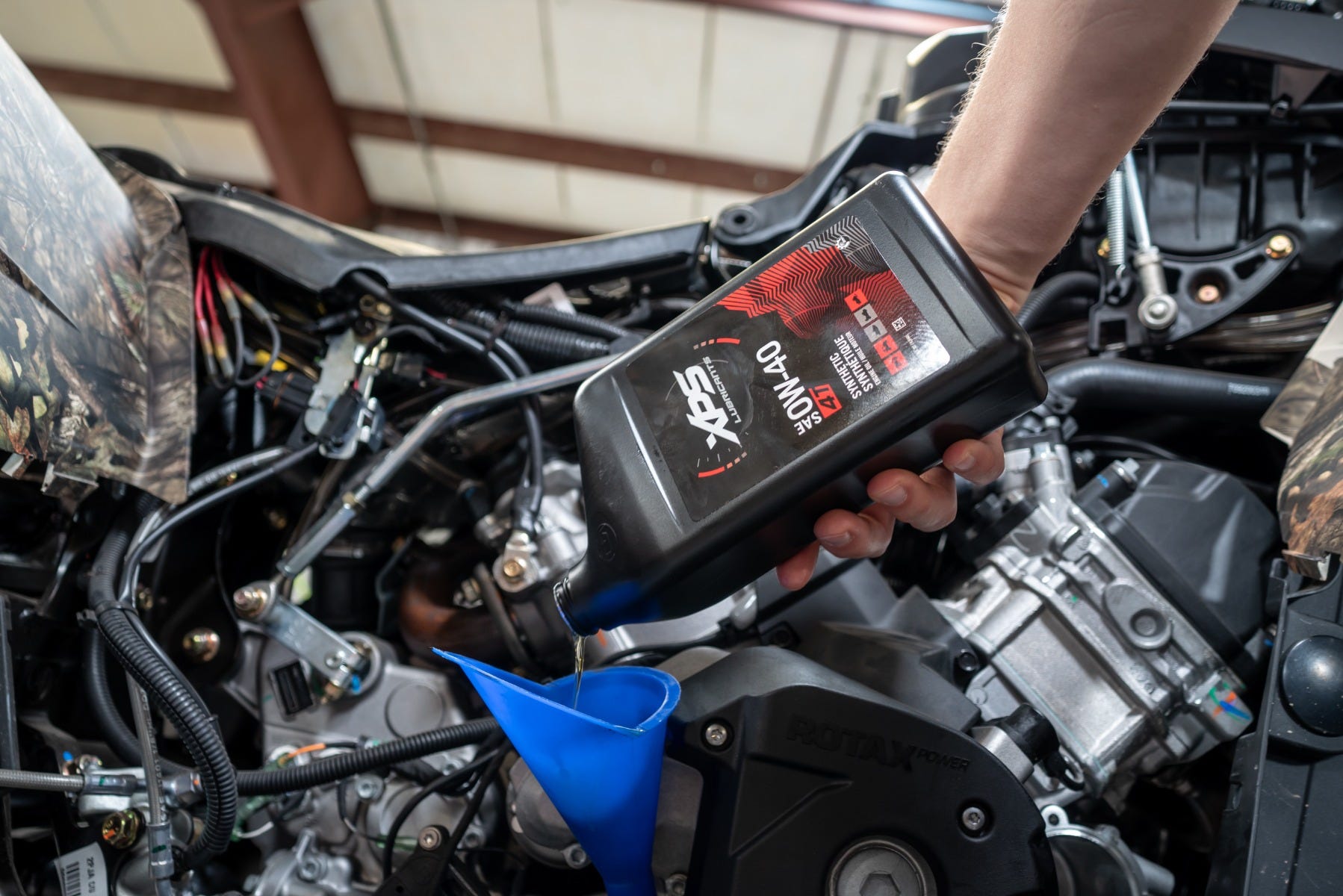 What are the components of oil?

After being refined, there’s still plenty of work to be done before we pour XPS oils into our machines. That refined oil is called a base oil, and it’s just one component of the finished product. There are several other components that combine to make the ideal solution for maximizing the performance and longevity of your engines.

Base oils typically make up 70-80% of the end product. Other additives are combined in different ratios (depending on engine needs). They are:

- Additive to improve viscosity or how freely the oil flows. You’ve probably heard this described as “thick” or “thin,” but it’s actually a measure of the ability for an oil to flow.

- Detergents that actually keep the components inside your engine clean.

- Dispersants which keep dirt and other contaminant particles suspended within the oil and away from critical parts where they might cause damage.

- Wear protection that helps your engine operate at its most optimal performance and efficiency.

While all oils have a common base (around 80%) The remaining 20% is a unique recipe of additives. It’s a complex piece of chemical artwork that XPS engineers often work years to perfect. Having too much of some ingredients or additives is just as bad as not having enough. Each XPS oil is developed alongside the engine it’s designed for and the operating conditions that engine will run in.

It’s that attention to detail and endless drive for perfection that sets them – and you – apart from the competition. So next time you pass your riding buddies on the road, snow, dirt, or water, give a little nod of thanks to those prehistoric plankton!

Engine Oil Education: What is Shear Stability and Why is it Important?

What is Oil Viscosity and Why Should I Care?

How to Winterize your Personal Watercraft

Where Does Oil Come From? How is oil made? What are the components of oil?